Welcome to Dents Plus.

Dents plus was established in 1995 by Michael Toon a bodyshop panel beater who then went on to train in PDR in Springfield USA to provide an alternative to removing dents rather than the traditional use of body fillers.

As this was a new industry it was limited to small dents but as the years went by the tooling and skills continually improved which meant that larger dents could then be worked.

Being able to work steel by shrinking stretched metal back to its original shape is a highly skilled process any wrong sequence in the process can damage the panel then leaving no alternative but to fill and paint.

Choose your technician carefully, research them.

Prices start from £75+ VAT per panel and increase from there depending on the size of the dent.

Our aim is to ensure that our customers are 100% satisfied with the repair and service provided. Our high standards and exceptional quality of work is what keeps us continually busy.

Keeping your vehicle original is so important no bodyshop , no matter how good can replicate factory original paintwork. At the manufacture, any dented panels which can’t be done by PDR are scrapped, they are not allowed to fill. 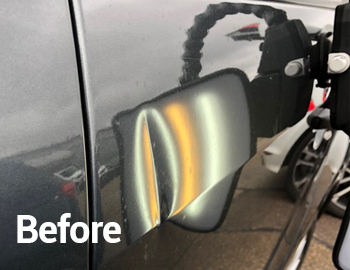 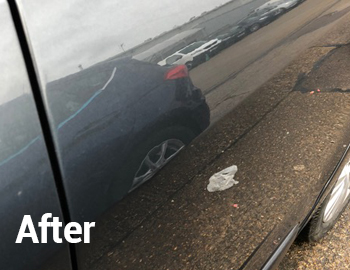 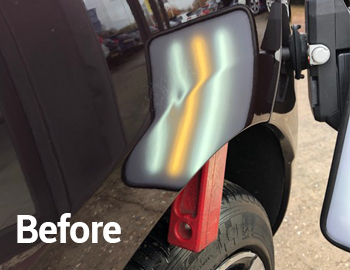 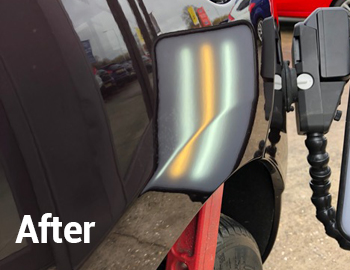 Get it wrong and you could end up with stretched lift marks where the dent was.

If in doubt who to trust your car to just Google their name, we cannot hide our history, feel free to Google Michael Toon dents.

We are completely mobile come to your home or place of work - whichever is more convenient to you.

We are full insured and guarantee our workmanship.

Michael came and repaired both my new 330 BMW which received a door sent when it was three days old! The car is perfect again. Amazing job, but equally impressive was the job he performed on our new to us Mini Convertible, the rear 1/4 had 3 smallish dents all on one panel. I am fussy about my cars and would recommend Dents + to anyone I know! Thank you. Kevin Selwood, Thorndon, Eye, Suffolk
He did a perfect job on my car Mercedes e class coupe 2011, he came to my work place and I'll definitely use him again. Csaba Kovacs, Aldeburgh
I had a dent in my wife's new bmw 2 series coupe, contacted Mike sending him images, and within 5 minutes he had booked us in for the same week! Perfect as I was in a hurry to get the job done. Mike was a great guy, very friendly , and did a top job, in fact my wife says he is a perfectionist!! We know where to come if we have any dents in the future! Darren Fulcher, Cambs
Mike took away 4 or 5 small parking type dents away from my 3 series. He certainly knows his stuff, you would not know they were there now. Will certainly use his services again when needed. David Perry, Rickinghall
I suffered hail storm damage to my 2014 BMW 435 convertible. There were about 40 dents over the roof, bonnet and boot. Michael was very confident he would return the car to its previous immaculate condition. I'm please and amazed to say he has! I have no hesitation in recommending Michael to you. Keith, Cambridge
Excellent work from Michael. Four small but sharp creases in tailgate. Now, wouldn’t know they’re there. Great price and definitely recommend. Roger C Drinkstone
Michael's work on my car, that had suffered damage as a result of over tightned roofrack feet, was flawless. He made dents vanish that other companies claimed could not be removed. I cannot recommend him highly enough. A thoroughly nice chap too. Henry H. Cambridge
I couldn't expect for better. Michael is a pro. Marian Stan, Cambridge
Very good repair on my beetle wheel arch - I would recommend you anyone wanting a professional job done. Jon Beech, Cambridge
Mike has real talent, saved me money and repaired the dent on my ford Classic rs 2000, spot on and I can't see it anymore, it's bugged me for ages, wish I'd known about Mike,s services earlier..I would highly recommend his work. I couldn't be happier. Thanks again. Dave Hewitt, Brandon